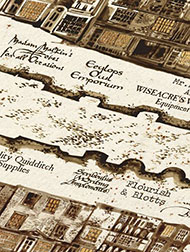 The "7" Noses of Soho & The Hidden Ears of Covent Garden

Legend has it that should you find the 7 Noses of Soho you will come into unimaginable wealth. We say don't look too hard, because there are no longer 7 of artist Rick Buckley's noses left! However it seems that illustrator Tim Fishlock wasn’t content with having only secret noses in London. His street art project was casting his own ears and hiding them around Covent Garden. Floral Street certainly has ears, can you find any more?

The House of Minalima

The House of Minalima is the brainchild of Miraphora Mina and Eduardo Lima, the creators of the graphic universe in the Harry Potter films. The store features all kinds of graphic works that appear in the film – including some that have come straight from the Harry Potter Studios.