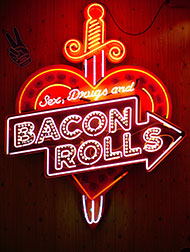 Your host, Just May, is a rising star of the East London Queer Performance Scene and the world’s premier Geri Halliwell impersonator. She’ll take you on a ride you won’t soon forget through Soho’s alleys and best-kept secrets.

Throughout this 2.5 hour evening cocktail tour, you’ll discover the club where the world heard Keith and Mick for the first time. You’ll see where Sir Elton cut his best album. You’ll return to the days when London’s sex shop mogul, Paul Raymond, was not only “the King of Soho”, but also the wealthiest man in Britain!

And of course, your host, Just May, will educate and entertain you with stories about London’s wild drag scene, then and now. She will be taking you on a stroll to three of Soho’s coolest cocktail bars to ensure that everyone remains in very high spirits.